John Lee Hancock tells the other side of the Bonnie & Clyde saga in a detective story starring Kevin Costner and Woody Harrelson. | HedexTV - Online Television and VOD Platform

Shifting the viewer's sympathies from a pair of remorselessly murderous folk heroes to the two lawmen trying to stop their crime spree, John Lee Hancock's The Highwaymen casts Kevin Costner and Woody Harrelson as the former Texas Rangers who came out...

shifting, the, viewers, sympathies, from, a, pair, of, remorselessly, murderous, folk, heroes, to, the, two, lawmen, trying, to, stop, their, crime, spree, john, lee, hancocks the, highwaymen casts, kevin, costner, and, woody, harrelson, as, the, former, texas, rangers, who, came, out

John Lee Hancock tells the other side of the Bonnie & Clyde saga in a detective story starring Kevin Costner and Woody Harrelson. 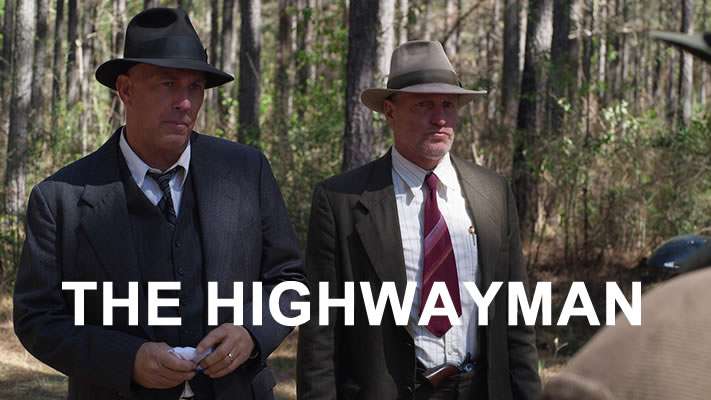 Shifting the viewer's sympathies from a pair of remorselessly murderous folk heroes to the two lawmen trying to stop their crime spree, John Lee Hancock's The Highwaymen casts Kevin Costner and Woody Harrelson as the former Texas Rangers who came out of retirement to hunt Bonnie Parker and Clyde Barrow. Self-consciously righteous about its agenda, admitting the darker sides of its heroes while in the same breath justifying their brutality, it's a workmanlike period manhunt film made noteworthy only by the names of its villains. Certainly, this Netflix pic stands no chance of replacing Arthur Penn's controversially nasty take on this story — except on Netflix, where his groundbreaking 1967 film is not available for streaming. Which is to say that, for the majority of movie consumers, John Lee Hancock might as well have made the only film about Bonnie and Clyde. Way to support film culture, Netflix.

Though it withholds their faces until the last moment of its climax, the movie opens with their deeds: The bank-robbing lovers drive up to a field near a prison work gang in Texas, send a rainstorm of Tommy gunfire into the air and free some of their compatriots in a daring jailbreak. It's the kind of thing the Lone Star State can't ignore, and soon the governor, "Ma" Ferguson (Kathy Bates), is sending multiple crews of detectives to track them down. Despite having shut down the Texas Ranger program, Ferguson is convinced by prison-system head Lee Simmons (John Carroll Lynch) to call two Rangers back as "special highway assignment" officers. The first is Costner's Frank Hamer, a legendary Ranger whose stature is not really explained here.

(The film hints at his sexism when Hamer refers to Ferguson as "the Lady Governor," but doesn't do it justice. In fact, he told reporters in the '30s that "when they elected a woman governor for the second time, I quit.")

Hamer drives out to Lubbock to recruit old partner Maney Gault (Harrelson), then thinks better of it when he sees the alcoholic shuffling feebly across his lawn. Gault convinces him he can do the job, though; soon, both men are trying to prove their worth to young G-men with modern notions and high-tech tools.

The movie uses the characters' age as a point of comic relief a few times, but it clearly believes that older is better: Whenever the Rangers and the Feds are on a crime scene together, Hamer is made to look like Sherlock Homes surrounded by Keystone cops. Despite having set things up as a race between rival teams to find the outlaws, the filmmakers more or less forget about the Feds midway through the picture.

As Hamer and Gault pursue leads and interview the killers' family members, Hamer gets plenty of chances to disabuse people of their romantic ideas. "Those kids you grew up with aren't human anymore," he tells a young cop (Thomas Mann) who once knew them. The lawmen and the film are disgusted by the extent to which ordinary Americans have romanticized Bonnie and Clyde. In its script and its staging of crime scenes, it does everything possible to suggest there was only one way to end their rampage: an ambush in Louisiana that was a de facto assassination.

Nobody comes to a movie like The Highwaymen looking for a nuanced view of crime and punishment, and heaven knows they won't get it here. Instead, we get lectures on poor choices and the things a man must do to keep the peace in a vicious world. Costner and Harrelson both give fine performances, but when it's time for each to have his one allotted dramatic monologue, you can practically hear the movie clearing its throat: Shut up and listen while the man is speaking, folks. You don't have to be sympathetic to a pair of psychopathic killers to wish for a movie with more tolerance of ambiguity and more confidence that its viewers already know right from wrong. When it comes to Bonnie and Clyde, you shouldn't look for it on Netflix.