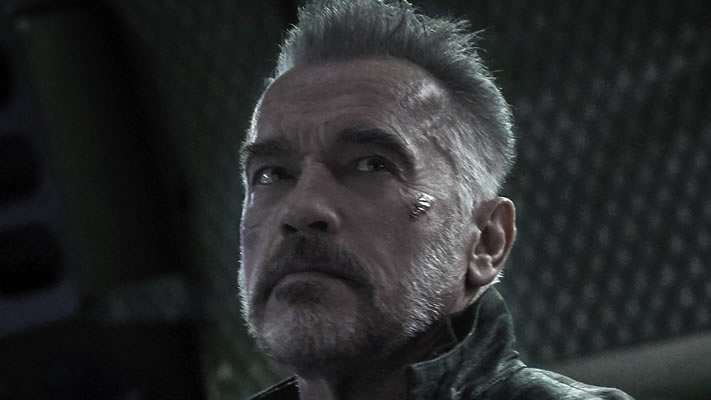 Science fiction is always been a tried and true genre in filmmaking, with an ability to enthrall and fascinate audiences. Chief among the biggest sci-fi franchise are the Terminator movies, starring a hulking Arnold Schwarzenegger as the robotic title character. Schwarzenegger has lead almost every film in the long running property, and will once again reprise his role for the upcoming Terminator: Dark Fate movie.

Dark Fate will reunite Arnold Schwarzenegger with James Cameron and OG Sarah Connor Linda Hamilton. The generations of Terminator fans are eager for any and all information regarding the highly anticipated sequel, and now we've got a glimpse at Arnold as The Terminator. And it looks awesome.

Does anyone else have chills? While we've seen Linda Hamilton looking like a certifiable badass as Sarah Connor, this is the best look we've gotten at Arnold Schwarzenegger's return as T-800.

This exciting image comes to us from IGN, which has acquired the first few stills from Terminator: Dark Fate. The movie is a direct sequel to Terminator 2, arguably the best installment in the beloved franchise. While the story is a complete mysteryto the public, there's been a strong cast assembled. Sarah Connor was shown with some female companions during the sci-fi adventure, and John Connor will be another character (although not played by Edward Furlong). There's also a new Terminator debuting, played by Gabriel Luna.

Arnold Schwarzenegger is looking like a robotic badass in this image, including a few flesh wounds which expose his silver metallic skull. The Terminator movies always feature the title character taking some punishment, with his mechanical body damaged and his fake skin falling off. This Dark Fate image only teases this transformation, as T-800 looks to be in good shape (albeit aged a bit).

Smart money says Terminator: Dark Fate puts a ton of focus on Linda Hamilton's signature character. While Sarah Connor has had new life in a short lived TV show and Terminator: Genisys, the upcoming sequel will mark Hamilton's first time reprising her role since Terminator 2. She played Sarah with grit and hardness in that sequel, and smart money says that time hasn't been kind to the franchise favorite.

The Halloween franchise did a similar move last year, retconning the myriad sequels and doing a direct follow-up to the original classic. It gave the chance for franchise star Jamie Lee Curtis to shine as her signature character, and might even continue with another sequel. Linda Hamilton's Sarah Connor is another beloved character in cinema, so fans are eager to see her reunite with Arnold Schwarzenegger and cause some explosions.

Terminator: Dark Fate will arrive in theaters on November 1, 2019. In the meantime, check out our 2019 release list to plan your next trip to the movies.